Blowouts can be aggravating. Particularly if they are on the inside dually. Even more so if you don’t have proper equipment to change one. You go a bit higher up the aggravation scale after 30 minutes on the phone trying to get roadside assistance from your automobile insurance company and they can’t find you no matter if you give them GPS coordinates and highway crossroads. I know that every state has its own way of naming and numbering. Farm Roads and Farm to Market roads are two different things in Texas. But GPS is GPS. Plus during the interminable automated answering system I gave permission to ping my phone. I finally told the woman on the other end of the line that I would just limp into town and find a street address.

So limp I did. Right to an auto parts store where I bought a breaker bar. No one in town had a light truck tire so I was going to just do the spare myself. Thirty minutes later I had the spare on the ground. In the process I found my breaker bar that I thought I had forgotten to pack so the nice man at the parts store refunded my money for the one I bought. 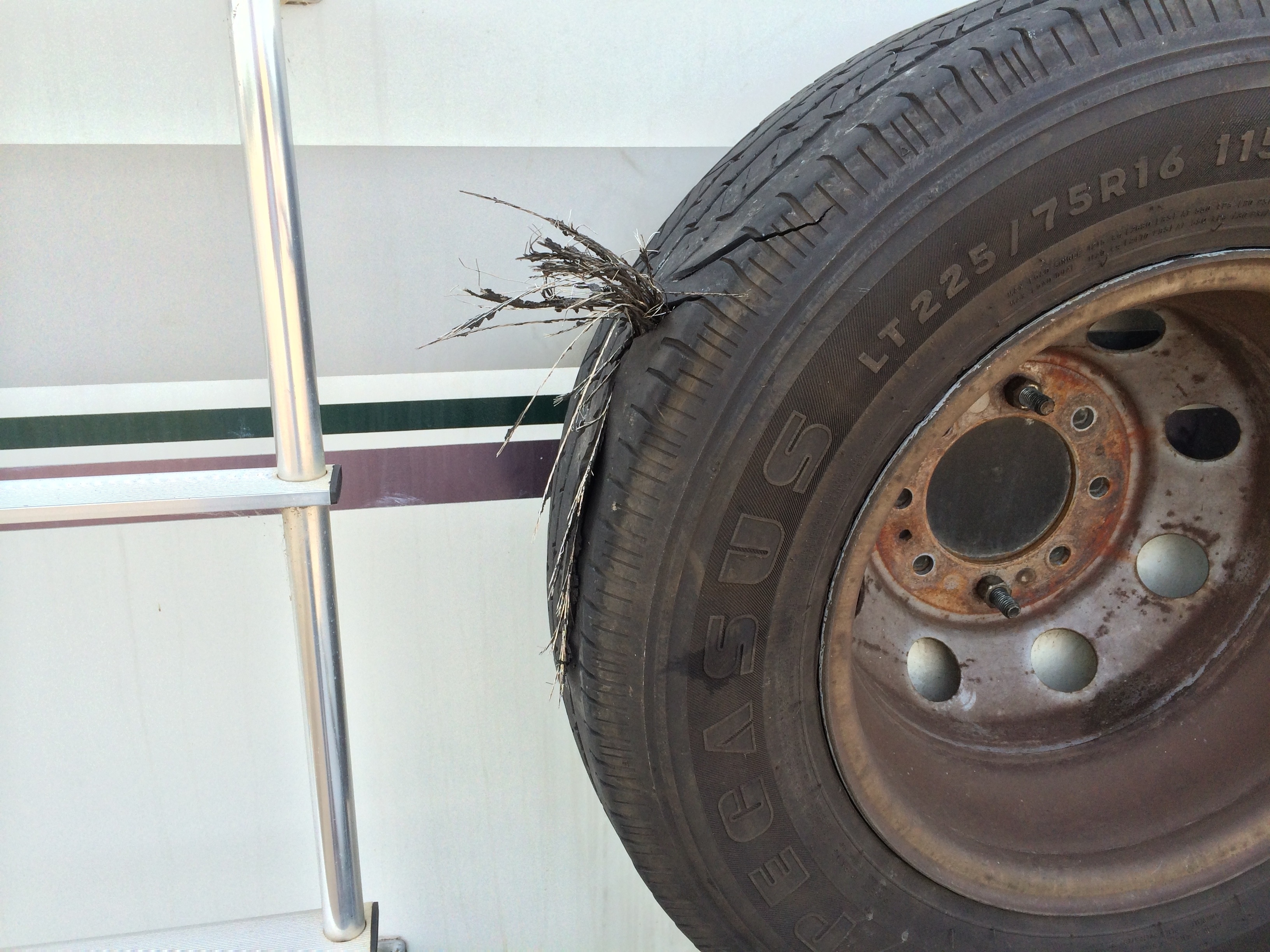 By now we knew we were probably not going to make it to our destination and would have to boondock somewhere. But just as we were rolling into Texarkana, one of the other tires decided it didn’t like its tread and shed it in a rapid, rather violent manner. Not knowing exactly what had happened I pulled onto the barely there shoulder that had a barrier wall running right at the edge. I had just missed an exit and the next one was miles down. Fearing to open the door so close to traffic I squeezed out the passenger window. That video would have gotten plenty of hits. A quick peek showed that the tire had lost all its tread down to the belts but was still holding air.

Now I faced two choices. Drive over a mile on this too-narrow shoulder to the next exit, or back about 200 feet to the one behind me. (This is where smart phones with maps come in really handy) Neither being a good choice, I opted for the backing up. I finally started breathing again when I was firmly on the exit ramp. Every 18-wheeler shook the rig and I feared greatly the guy who was texting and driving (IT CAN WAIT!). The ramp “happened” to take us down to a shopping area where there was a Walmart. But alas, all the tire places were just closing and we would have to wait until morning. 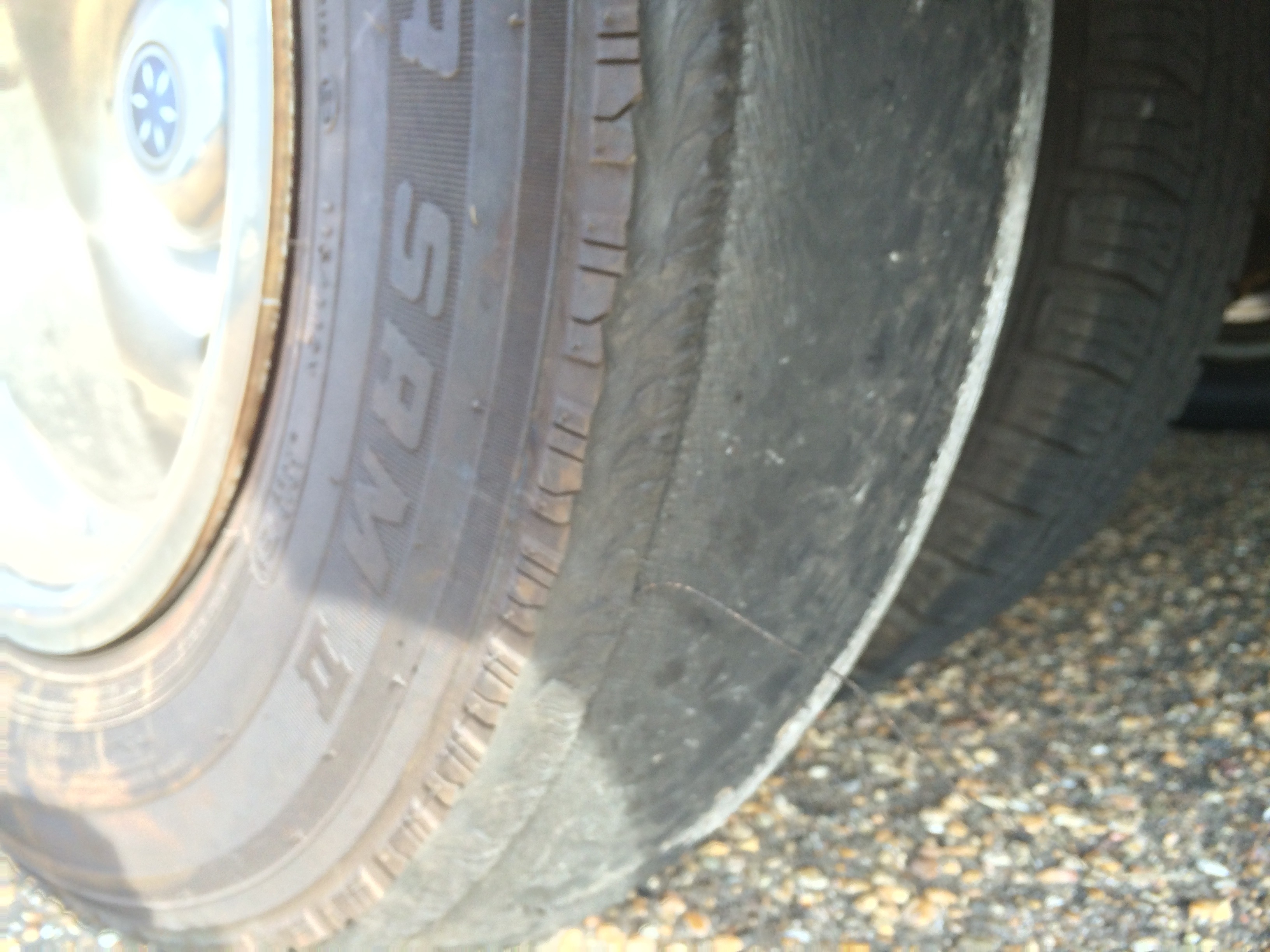 I did a little shopping (Thanks Lowes for the free wi-fi) and in the morning I made some phone calls. We decided some name brand tires from Discount Tire would be in order. I heard a man say that tires are some of the cheapest insurance you can buy. I understand what he meant now. Not only were we delayed by a day, but the tread flying off the tire damaged the wheel well and undercarriage to the tune of over $3,000 and countess hours of phone calls, emails and driving over for estimates. Forturnately we were able to complete our outing this time.

The moral of the story: Maintenance. Learn to read the date codes on your tires (last 4 digits on the number are the week and year of manufacture) and replace them if they are over five years old, especially if you don’t drive much. Did you know that tires have compound in them that protect against UV and ozone damage but that they “ooze” out when the tire flexes while driving?. I just found that out, so I plan to take the RV out about once a month to keep the tires in shape. Also, cover your tires as much as possible with a white cover. It not only protects from UV but a parked tire can get really hot. Wash your tires after an outing if you are putting the RV in storage. A gentle detergent is good. And try to park where the pavement drains or use a parking block – oversized jack pads are good. 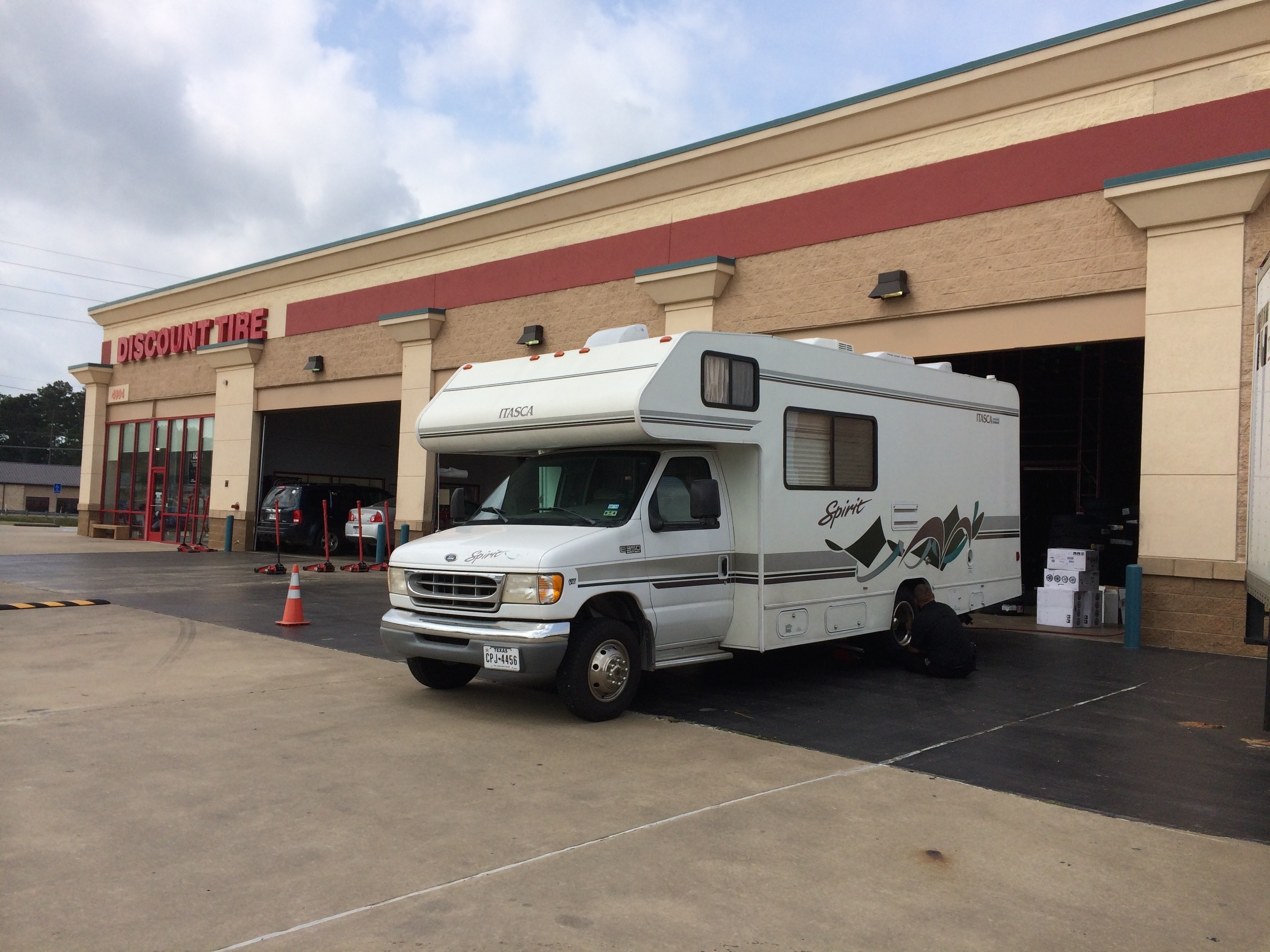 My spare was brand new, so I ended up buying three more which gives me all new on the rear. The fronts are only about two years old and the tire expert guy says they looked good. I kept the best old tire for a spare. I hope I don’t regret that decision. And I bought a road hazard that is transferrable. So once I replace the fronts I may never need to buy another tire for this rig. Then again, I only plan to keep it for about four more years till we go full time.