Gulpha Gorge is a hidden gem in Hot Springs National Park. Most of the spaces have full hookups, all are paved. As it’s name indicates, it’s right on the Gulpha Creek (“gorge” may be a bit of exaggeration). We chose site 20 because it was right on the creek and at the end of the row, but a dozen others would have been just as nice. Each site has a barbecue pit and picnic table, but no fire ring. There are a couple of rings in the primitive sites.

You can take hiking trails all the way into town if so inclined (‘incline’ – pun intended). That saves trying to find parking and having to feed the meters. Several trails were available. Although some were so steep they have stairs, they are definitely doable.

Lake Catherine State Park is near Hot Springs and is on the shores of a lake used for the hydroelectric power. The power plant’s gentle, constant hum is the only thing that seems to break the silence. You can pick from wooded sites or lakefront. Campgrounds A and C have full hookups with 50 amp service. Campground B are less improved, have only water and 30 amp electric, but are less expensive. 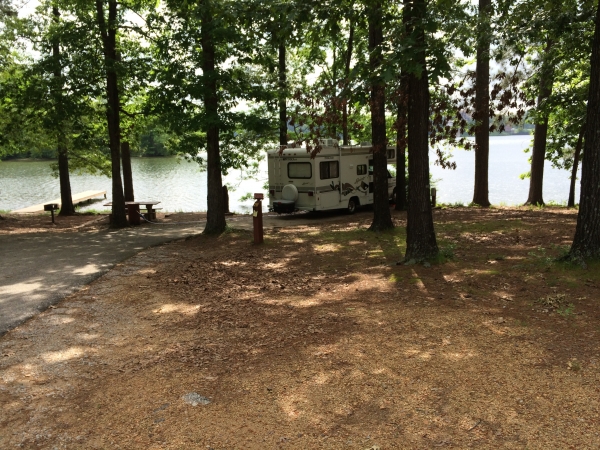 Our first trip in the fall we opted for #58 on the lakefront (Campground C), it had some sun so that was better for winter. #54 had a fence and would be good for winter also. In the woody part (Campground A), #11 would have been an excellent choice. When we went back the next spring we went to Campground B and selected #28. It was plenty shady and private. The next site over (#27) was as nice and a little more level.  Alternatively, #36 or #38 would have been good. These last sites are all on cup-de-sacs and get less traffic.

There are several hiking trails. You can pick up the trail to a waterfall off a service road at the end of Campground C. This shortcut makes it just a quarter mile hike to the falls. Going around the other way is about a mile with much of it along a creek. Very scenic. The waterfall has a pool at the base of it with plenty of cool water for a summer dip.

Check out our pics from Lake Catherine SP. Click on a thumbnail to open a gallery with captions.

Petit Jean State Park is near Morrilton, AR. It’s a nice park. The spaces are reasonably level and spaced about how you would expect a state park. Some sites have better arrangements of fire rings, lantern poles and tables. I wish our fire ring was farther from the motorhome than it was. But it’s doable. Site 64 slopes down from the road so I pulled in head first. I could have used a 2 inch lift on the right, but it was bearable. Not Wacky Shack bad like some spaces.

The next night we moved over to site 66. It was longer and sloped the other way. The hose connection was right at the street. The layout was better and it was private enough because there weren’t many campers. I like this area because it’s on the end of a cul-de-sac so it had a lot less traffic.

The park itself has canoeing, lots of hiking and some good scenery. Some of the walking is on asphalt hike/bike paths. Some are boardwalks and some are rugged trails. Just driving around can yield some beautiful views. Of course, these activities draw crowds. So expect the park to be crowded during peak camping times. I understand this park is popular with scout groups, etc.

Down a rough Red Bluff Road there are two scenic overlooks. Not a bad drive if you have a tow vehicle but not recommended for large rigs. The overlook at the Highway 155 and 154 junction towards the west end of the park is a much better if you don’t want the rough narrow road. It overlooks the same valley from a different angle.